As part of my research concerning ICS, I stumbled across CybatiWorks, which is a ICS simulator. From their website:

Now actually getting a kit will cost you money, however they provide the VM and Raspberry Pi image on their google+ page. (You will have to be approved to join the group to download it). I don't have a Raspberry Pi at the moment, and I decided I would like to test this out before spending the money on a Pi.

Unfortunately, the Pi is ARM based, and my favorite virtualization tool, VMWare workstation doesn't support ARM. So we'll have to find another option. I settled on QEMU. Now QEMU runs natively on linux, but I don't want the overhead of running a vm inside of a vm. So first you need to install QEMU for windows which you can grab a copy of here (or you can go grab a copy from the qemu website and build from source). I used version 2.4.0, as it's a standalone executable, no install needed.

Next, we will need a ARM kernel, which can be download from here. I used the 'kernel-qemu-3.10.25-wheezy' image. Download that and put it in the same folder as QEMU.

Now we need the CybatiWorksPI.img file from their google drive. Download this and put it in the folder you installed QEMU. Warning, it's a rather large file at 7 GB.

Now we can boot the vm. Open up a command prompt and navigate to the folder where you installed QEMU and type:

This will boot the Pi image and drop us into bash: 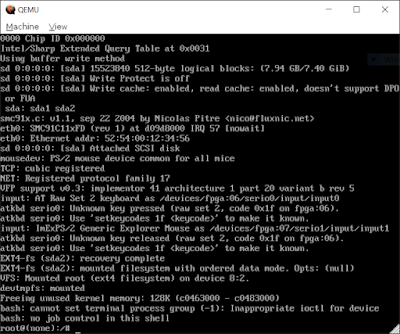